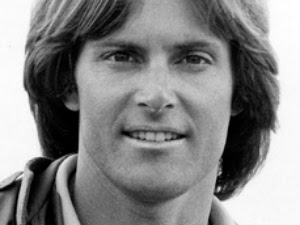 He won my heart during the 1976 Olympics, winning gold for the decathlon.  He was beautiful; in sport and off the field,  and I just admired him.

I was caught up, even at the young age of ten, in all of the Jenner stardom.  I had The Box.  I ate the Wheaties, and kept the empty box and tacked it onto my bedroom wall, alongside my poster of John Denver.

Soon, though, like every other idol, I lost interest.  I took the box down and put it into my bedroom closet and replaced it with Shaun Cassidy wallpaper.  That didn't mean my admiration for Bruce was gone.  Hardly.  I just kind of forgot about him.

His name was always out there, though, and when he was in the news or being interviewed, I would usually stop to listen, then just go about my day.  It was like, "Oh yeah, Bruce Jenner?  He was so awesome in '76!"  Always a fan - but from afar.

I completely lost track of him after that.  I married, and had kids.  No real mention of him except once in a while during the Olympics.  "Who could forget that day in 1976?"  kind of stuff.  Then the Internet was born and the entire globe changed in how it communicated.  And suddenly there was no privacy.  And everyone's skeletons were now out.  And nobody was sheltered. Now tabloids were not just a thing you saw at the check-out counter.  With a click of your mouse, you could get the ugliest stories about almost anyone, instantly.

And then, the "reality-TV" show was born. Perhaps it started with MTV's "The Real World"  and yes, I got totally into the first two seasons of that.  It soon became the same story, though, and I lost interest.  The cable networks did not.  Suddenly, every other show was about people either being forced to live together, or about famous families.  I watched "The Osbournes" for a few seasons, but that too became predictable. Then the Kardashian family got their show.  I had no flippin' idea who those people were.  Why are they so famous? I didn't get it.  Then I read that Bruce Jenner was on this show. Why would he be a part of a show like this?  So I watched it.  Ah-ha.  So that's why.  Okay, so he married into this family.  I could not watch anymore.  I was instantly disgusted by these people and turned it off.  And suddenly, the Kardashians were everywhere.

If we fast-forward a few years, we'll find that Bruce is suddenly in the "news" and quite a lot. Not for anything to do with his Olympic past, but because of the dynamics of his family, mainly between he and his wife, Kris Jenner, nee Kardashian.  Then talk of how his appearance was changing.  Is he wearing eye-liner?  Did he get his eyebrows waxed a bit too thin?  And then the media went crazy with this "story".  Even so far as putting his face on the cover of a major rag mag and photo-shopping make up on his face.

I'll just stop there.  Now, here is my take on Bruce Jenner.  Leave him alone.  I can't imagine how he feels right now.  I can't imagine how he's felt all throughout all of his life.  I don't know the man, so I can't put that into words.  What I can't fathom is having to hide who you are.  Can you imagine  living your life, and having to put on airs because others can't accept who you truly are?  I can't.  Many people have had to do this; hiding who they are. I don't care who you are; rich and famous, down and out, the girl-next-door, a relative or my physician.  Wouldn't it be a wonderful world if people could just support each other in their choices?

It's in the news that Bruce Jenner is about to come-out as a woman in transition.  Yes, this may shock some.  I'll be honest; at first, it did take me by surprise.  But, I got over it and he will soon be a she.  It's 2015, folks.  Can't we all just support each other?  I believe he knew from birth that he was not in the right body.  People may fight me on that.  Religion will be thrown in. "God doesn't make mistakes."  Bruce Jenner is not a mistake, and neither are all of our transsexual and transgendered neighbors.  Love thy neighbor.

I really have no use for any of the Kardashians, but I have to admit that when I saw Kim on ET recently talking about Bruce, I was really impressed with how she not only dealt with the interviewer, but she really seemed to be supporting her step-father.  My respect for her inched up a bit.  Very nice, Kim.


Anyway, I support him in his journey to find his way.  My admiration and respect has not changed.  In fact, I'd say it's increased quite a bit.  I haven't decided on if I'll watch his series on his transformation or not.  I want to believe that this is a serious look into how a person goes about making this change.  Yes, there will the the haters and the trolls, but I believe that he can overlook them and continue to pursue the person he truly is; a great one.