Whoever Said That Baby Steps Were Easy Is Wrong. So Incredibly Wrong.

I went to the pool with my son, Alex.  I knew - and so did he - that since this would be my first walk to the pool since last summer, and my first real walk anywhere, that I would need to take things very slow and easy.  Walking to the pool is fine (it's walking back; wet, sweaty and hot, that sucks). We did it and though I tired 3/4 of the way there, I took a breather and then continued until we reached the pool.

A much warmer day than the last trip to the pool, Al and I were sweaty and tired. We both opted for shade instead of sun. We unpacked, and soon I couldn't bear it any longer.

"Don't dive in."  Alex warned. I agreed, but since the well was right there, I contemplated. "Don't do anything that'll make you regret it later, Ma."

I love that boy of mine.

I sat at the edge of the 3 feet and then got in.

The water was amazing.  Perfect.  See what waiting a few hot days can do to pool water?  It was sheer (ha) bliss. I watched Alex jump off of the board.  I then decided to try to swim half a lap.  I swam 3/4 of it, then was forced to stop.  Abdominal pain began in earnest. I cursed under my breath.  I told Al that I would now just enjoy the water and sun without over-exerting myself.  He thanked me.

We later sunned and had a snack.  That's when I noticed my hands shaking.  I cursed again, but to myself as I had a neighbor and her small daughter I'm sure would not appreciate my words of disgust.  Al asked if I was ready to go home and I nodded.  We packed up and just as we were about to leave the pool, I began shaking.  I told Alex that I needed sugar.  I bought myself a small regular coke.  Weird because I not only ate a substantial lunch and my glucose read 179, but I also had some pretzel chips at the pool just to keep my sugar from plummeting.

Halfway home, I began to feel better but then the pain began.  Lower ab pain and pain from my past surgeries.  By the time I got inside, I was sweaty and shaky still.  I tested and it read 71.  Not exactly hypo, but getting there.  At 70, I begin to feel the hypo(glycemic) shakes beginning. Thank God for pretzels and regular Coke.  I may have passed out.  Another note for my endocrinologist.

And again, now the pain has set in.  It felt so good in the pool, and especially with Alex, my water bug, but I guess I'm just not ready to walk to the pool just yet. As soon as I finish this entry, I'll put something on for supper for the three of us, (Rob gets to see the Ewes play courtesy of Pandora), and then it's percocet time... dammit.  I hate that shit.  I hate pain, too...  Gotta pick my hatred.

So there ya go.  Oh, we did end up moving into the sun.  I am still lighter than my husband. I still cannot have that.  So, I worked on it a bit, today.  Almost there: 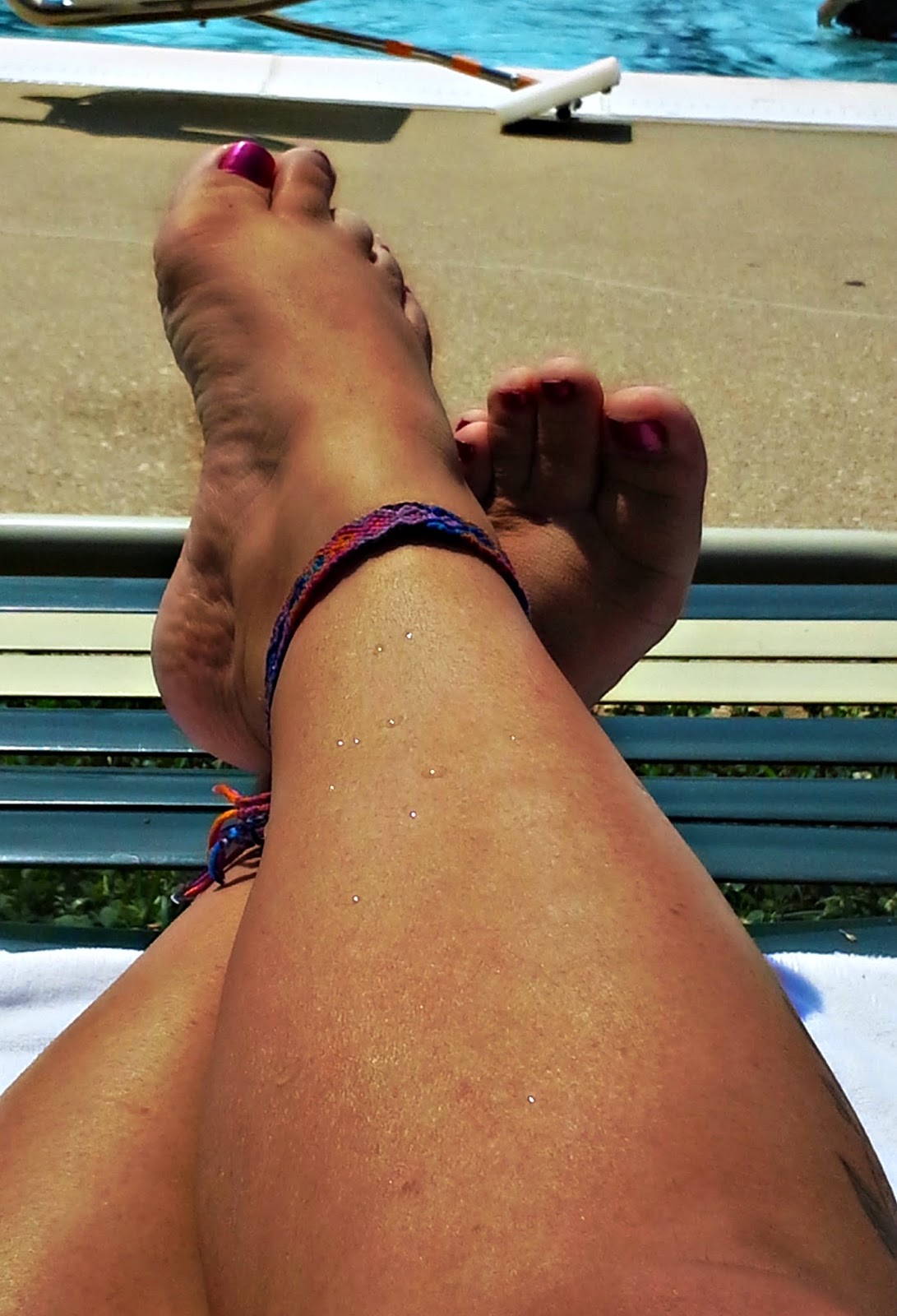