A beautiful Father's day; azure skies.  A tiny breeze.  And only a few people in the water.  You'd think that  would be a pretty sharp clue... nyope (yep, I spelled it like I say it). So, Alex (Aaron doesn't like to swim), Rob, and I set up our area, and after making sure that Rob put sunscreen on his head, we sat and let the sun warm us.  For the first time in our history together, Rob is actually tanner than I am.  We must fix that.

It was in the low 80's, but the midday sun was really strong and we could feel our bodies burning, even with SPF 15.  So, I asked Rob if he was ready to get into the water.

Our neighborhood pool has tow lap lanes. Other than the diving area, this is the only place where you can dive in, and since it is a lane, you gotta swim it.  We each took to our lanes.  We each dipped our toes in so we could do that all-important "is this water gonna kill me?" temperature check.  Okay, it was a bit chilly.  I got this.

We both just stood there, looking at the beautiful water.  Uh-huh.  Finally, Rob did it.  I didn't.  I waited for him to emerge.  I think he said some unsavory words to describe his pain.

Now, besides the shock of how cold it was, the moment my body went into the water, I felt my insides ... I don't know... move is not the correct term. Jostle.  That's it.  No pain, but boy did it feel WEIRD. So, I broke the surface.  I swam half-way, swam under the lane markers, and headed for the exit ladder.

"Seriously?"  I walked even faster, and got out.

I have never been so cold in all of my life... except when I had a raging fever with bacterial pneumonia.  I was not going to enjoy this.  I saw Alex from across the pool; 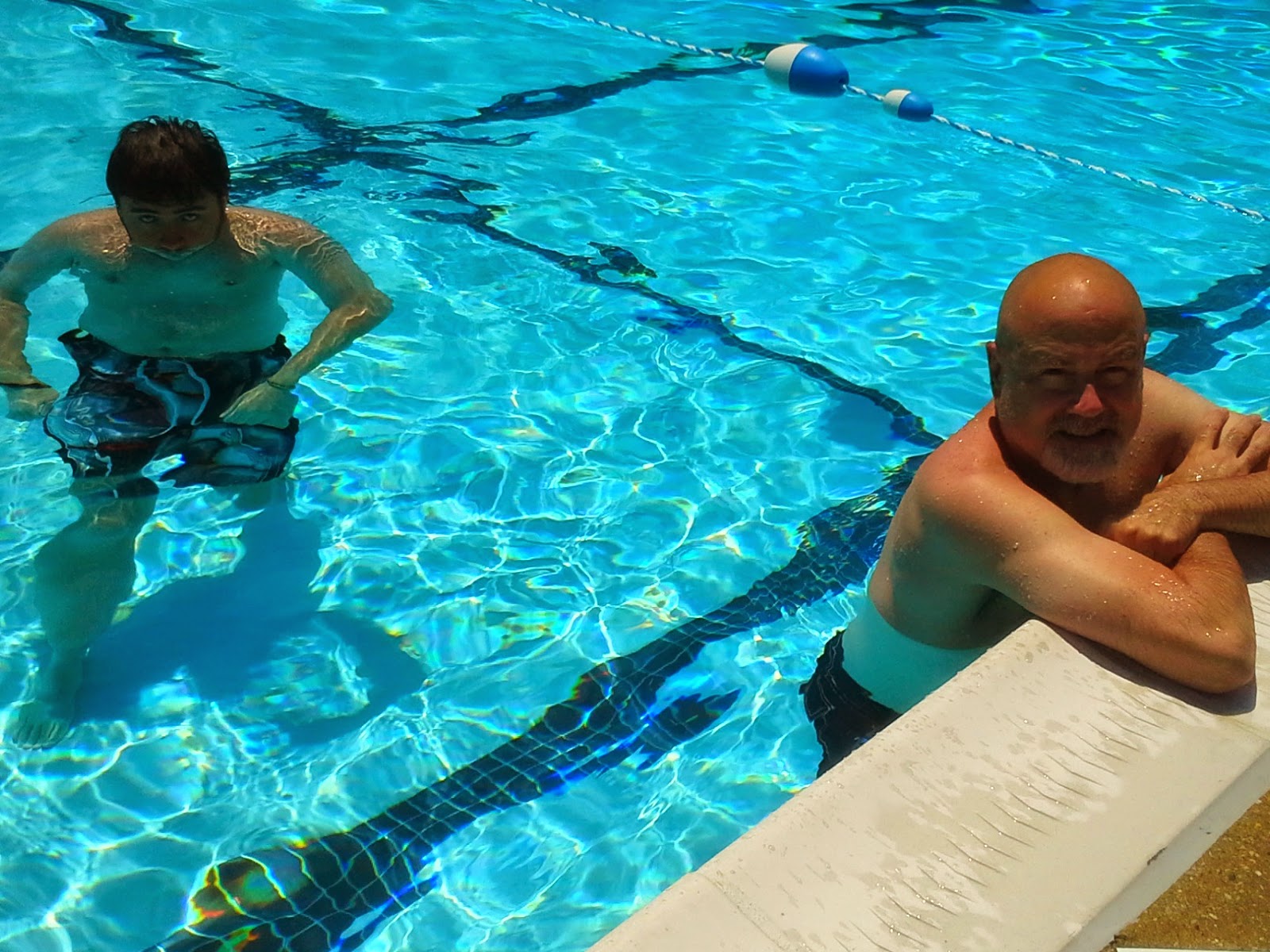 "Cold?" I saw him say.  By the time I could answer him, I was sitting next to him, my towel around my shivering body. "Oh, dear..." he said, looking at the water.  Rob was enjoying it, and still trying to convince me to come back in.  Alex eventually got up his courage and went in.  He loved it.  I suddenly felt stupid.  So, I got up and went around to the 'beach entrance' to the pool.  I slowly waded until I came to three feet.  I was cold all over again, so I turned around and rested my arms on the edge, letting the sun warm my back.  I was still freezing.  Rob and Alex came to me and we met at the corner.  I managed to get to them and then it happened;  I was fine.  I was finally okay.  I still rested against the side.  And then, a bug of some sort decided to ruin it for me.  It landed on my wet head.  I panicked, swatting like a karate master. I pissed it off, so it followed me until I had to dunk my head beneath the icy water to escape the killer bug from hell.

That was it.  I was done.  Happy feeling gone.  I'm out.  I'm not exactly sure what happened;  usually I don't mind the chilly water. I was FREEZING.  Don't guys dislike that? Shrinkage and all that?  Maybe it's because my body is still in healing mode.  It needs warmth, not icy pool water.

We ended up leaving shortly after that.  We all agreed that once the water temp goes up some, it'll be more fun for all.  I began aching, too, and after I got home, I was in need of some pain meds.  Baby steps.  But at least I took the plunge.