Getting My (Irish) Pride On

My husband is not Irish.  He could care less about Irish Soda Bread (yes, it deserves caps).  I'm sure he would drink a Guinness Stout, but not to celebrate my bloodlines.  He is permanently scarred with memories of the days when his mother served Shepherd's Pie.  I don't know if it truly tasted bad or if it's just the finickiness I have come to know about him.  I'm going with the latter.  I must admit, it's not one of my favorites, either, but I'll certainly eat it.

Green.  My mom's favorite color.  Always.  St. Paddy's day meant I went to school with green tights, a green dress with some sort of plaid or Argyle.  I even remember a boy who had blonde hair coming to class in first grade with his hair dyed green!  Back in 1971, you just didn't see that.  It was so cool.  I don't know what his mom used to dye it, but it was green until we left school in June.

Dad changed our last name from Gambino to O'Gambin every year.  "Be sure to remember to sign all of your school work as Mary O'Gambin!"  I never forgot.  I still do it.

I asked my husband if he thought a corned beef sounded good for supper on Sunday.  He nodded.  "Potatoes?  I'll mash them... the boys don't like boiled (rolls eyes) potatoes.  I could put some cabbage and load it with lots of butter."  The look on  his face... like a kid being told Brussels sprouts in dirt were for dinner.  "Colcannon."  Then the light bulb lit up.

"Uh... cheyah!" I say, incredulously.  "I think I'll make some peas - Aaron likes them - and some Irish Soda Bread (again, caps are necessary).

This began a discussion about celebrations surrounding people and different cultures.  After a few minutes, he started giggling.

"Hey.  Why can't there be a day to celebrate Russia?"  He gets up and folds his arms and begins a scary-looking dance. "You know like say,"  and he then speaks in his best (or worst) impression of a Russian accent, "Happy St. Nikolas Day!"  His voice roars.  I nod and shrug.  His dance suddenly turns into a bad Zorba the Greek impression, now.

I just watch and shake my head.

"Dear, they already have that celebration.  It's called Christmas."

The dancing stopped.  "No, that's to celebrate the birth of Christ."

I guess it's only fair - I'll start researching Russian celebrations and holidays.

Anyway, I  have tried to instill a love for my Irish side into my sons.  They have a bit of the blood, too!  Alex will wear green if I suggest it.  Aaron - maybe.  *sigh*

It's alright.  I show enough pride to make up for them.  Thank God I have a few pallets of green eye-shadow! 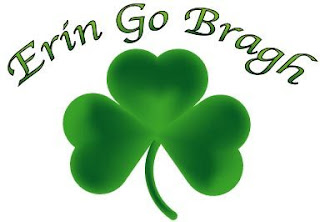