It's that time again.  Lent.  The season of penance, reflection and sacrifice.  While I  have not been a practicing Catholic for years... okay, nearly all of my life... I still believe strongly in taking time to reflect and cleanse.

I never went to church.  My parents never went to church.   I never really knew why until I was ready to get married.  I won't go into their specific reasons, but both of my folks had strong issues against the Catholic church. Yes, I was Baptized... that's it, though.  As a child, I would attribute our absence from Mass every Sunday to my father being in too much pain to go.  Then, a few hours later, he'd be building a new cabinet for Ma, or a set of drawers for me.  I never did the math.

I would go to Mass with friends or with my cousins.  I never did the milestones:  no First Communion.  No Confirmation.  I went to my cousin's Confirmation ceremony.  I never understood it.  She got a nice new name.  That's all I knew.  In high school, my first serious boyfriend's family was also Catholic.  I went to Mass with them on a few occasions.  I knew my lines and played the part very well; Sit. Stand. Kneel.

I started my own instruction in the months prior to getting engaged.  I did want a Mass for my marriage ceremony.  I wanted my father to walk me down the aisle.  I wanted to marry the man of my dreams.  I learned a lot about the Church.  I also felt myself inching away from it.  When I did finally become engaged, my intended and I set up official instruction through his church.  He was raised Catholic as well, but his father was Jewish.  Christmas instead of Chanukah, and Passover instead of Easter.  Neat!

We met with his priest from childhood.  Father K. That's what he was called. We set up our premarital classes.  This is where things started to get a bit ... I don't know; crazy?  Usually, this is a time in an engaged woman's life when she is happily sampling cake, trying on dresses, picking colors, looking at flowers. Planning.

I wanted no part of it.  All I cared about was becoming Rob's wife.  I could care less about all of those things... and yes, I saw them as silly things. I could have cared less about boutonnieres, Jordan almonds, table-scapes (shiver - I detest that phrase), invitation fonts, and ring pillows. I felt that a huge wedding reception (and in my family I have no choice - the extended family itself is huge) was a big waste of needed money.  My father certainly could not afford it.  I called them together - my folks and my guy. I asked Rob if he wanted to marry me.  Puzzled, he nodded, as my parents looked on, terrified.  "Good," I said.  "What are you doing next Friday?"  It was done.  We got blissfully wed in Rockville at the Montgomery County Courthouse.  My dress came off the rack.  Not one regret.  Ever.  And my folks were ecstatic.

Wow, have I prattled on!  My husband and I have pretty much "left" the Church.  In a way, I feel bad that I did not really instill it in my children.  I can recall a conversation with my father, and telling him my feelings about this.  He simply looked at me and said,  "Don't let it bother you.  Don't you dare feel guilty about this.  If you and Rob are not believers, then don't involve those boys.  You'll find your way.  God loves you.  Don't ever think that you need to pray in a gilded cathedral in order to be close to Christ.  He's everywhere."  Those words have been in my heart every day.

I have taught my children a bit.  They are spiritual... like me, and their father.  They pray.  Talk to God.  I pray daily... several times a day at times.  Sometimes I do feel a bit lost or left out.  At times I feel the need for sanctuary.  I went to mass at the Catholic Church near us.  I had Aaron, my eldest son, Baptized there.  I never felt welcomed.  I never felt "home."  It was more like a dress contest and I never went back.

Still, I practice Lent.  I mean, I alone, practice Lent.  My husband doesn't.  My children don't.  They are familiar with the practice.  They choose not to, but then again, they do RAK's all the time (Random Acts of Kindness).  My children are very GOOD people.  Sure, their halos have a few cracks... even a dent here and there... but they are good people. 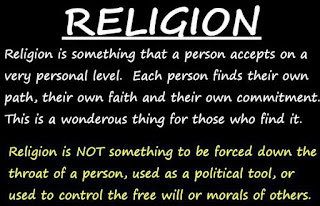 My disciplines for Lent are to pray more.  Doing more RAKs.  To sacrifice.

There is no wrong way to pray to be close to God.  As long as we're together.