I've been posting on Facebook how much I loved the idea of creating a Milagros cross of my very own.  So much so that my cousin who sent me my cross, Karen, asked me what charms I would like to have and why.  It only took a minute to tell her.  A leg.  That is my family crest (Gambino means, "little leg" or from "Gamba" meaning "leg").  That symbol means quite a lot to me.  Some say "Gambino" means a person with short legs.  That could be me, and it could also pertain to my father, who was born with one leg significantly shorter than the other.  Who knows.  Turns out, Karen told me, that leg Milagros are very common.  As are lungs, chests, breasts.  The more she spoke, the more excited I became.

She told me that the Girlies (her granddaughters) were still on Christmas holiday, and she thought a little field trip into Austin's shopping area was in order.  I told her not to buy me anything.  After all, it was just after Christmas - who has money?  I didn't!  She got a bit upset and told me not to ask her that.  She then told me that it would be a fun trip, a quest.  She would stop into a few shops and churches and hunt for the charms I mentioned.

I called her after she let me know that she was back from her little treasure hunt.  She was so excited, and, of course, that made me excited!  The Girlies had a wonderful time sorting through tray after tray of shiny charms.  What I would have done to have been able to tag along!  She told me that she would send them the following day.

I received my package just days later.  If anyone ever gets a gift from Karen, not only is the gift lovely, but she usually adds her special touch when packaging it up. She makes opening gifts a treasure hunt, too!  The first thing I saw was a calendar from the shop where their quest began:  Tesoros Trading Company.  A business card from another little shop, Cantu's Mexican Imports.

Then, I unwrapped something I totally didn't expect.  It was a card.  When I looked closer, I saw tiny words.  My heart leapt when I realized it was made by my little cousin, Connie, one of Karen's granddaughters.
Connie had - I believe - traced each charm and then scratched out the center of each tracing.  More Milagros for me!  I already treasure this so very much.  It's not only sparkly and colorful, but I know this was made especially for me by Connie. 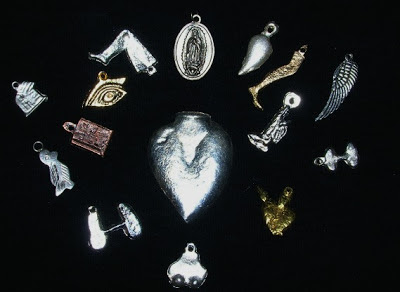 Then, I saw my new charms.  I love them!  I have another set of lungs, a watchful eye, a house, two legs (again,lots of meaning there), a wing, a chest with breasts, a book (tee-hee), a Virgin of Guadalupe, half of a heart, a heart with an arrow, a sun worshiper, and a large heart.

I am so blessed to have these!  Karen and I discussed places for me (and another cousin) to look for and purchase more, as these can get very expensive.  Karen mentioned a seller on eBay that sold 25 Milagros charms for $6.00.  I finally found it, although it may not be the exact same seller.  So, I went ahead and bought the set.  Two - yes, two - days later, my haul arrived: 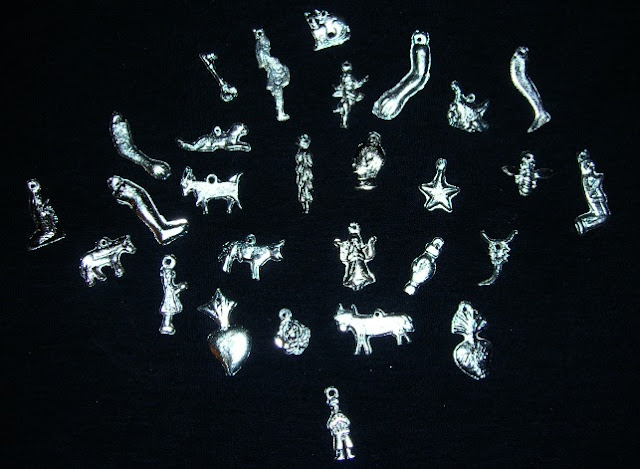 Now, as happy as I am with these, I don't think the quality is anywhere near as nice as the ones that Karen and the Girlies picked out for me.  While I do want to start collecting and getting a big haul is always nice, I don't want... crap.  Some of these are very nice, while others are not.  Still, the seller tntmercantile|ebay guarantees "No duplicates!"  I love them, even if they aren't top quality.  Still, a lesson is learned the hard way:  Look before you buy... and maybe even do a bit of research... AND... you get what you pay for.

I do have a few favorites from this haul:

I can't tell, but I'm calling this a fairy.  I see wings and it just doesn't resemble a cherub.  I just finished my first novel and it's about... fairies.  Yeah!

I won't share names, but I do have a friend that has been trying to get pregnant for a very long time and just isn't having any luck.  Thousands of dollars spent on IVF and horrible hormone injections are not working,and to say that my friend is sad is really coating it thin.  I saw this and thought of her immediately.

I don't want to upset my friend, so maybe if she reads this, she'll have some insight.  I am a firm believer in things happening for a reason.  I myself am finished bearing children.  I can certainly spare this charm.  It's hers if she'd like to have it.  No pressure.

So now comes the hard part.  Do I make a cross?  Do I scour through the Internet and buy one?  Do I hit estate and garage sales?  Okay, I can do that.  I do have a crucifix that hung on the entrance to my parent's hallway for 21 years.  It then was placed near the entrance to my father's kitchen at his house in Arlington.  On either side of the upper part of the cross, he had a photo of his mother, and a photo of my mom's mother.  It was lovely.  It carries holy water inside it.  It is truly a blessed cross.  Jesus broke an arm.  I have it haphazardly repaired.  I don't know anything about crucifixes and crosses, but I wonder if it would be okay to add to this cross?  Would it be a sacrilege?  I guess I don't really go by any such set of Catholic "rules" or even know if they exist.  Still, it is a powerful item, and I don't think I want to mess with its forces.

I'd love to try my hand at actually making my own cross.  This is what I have in mind for my cross: I love the large heart in the middle with hands extending outward.  I love the top of the cross.  I have lovingly borrowed an idea from the maker of this Milagros Cross: 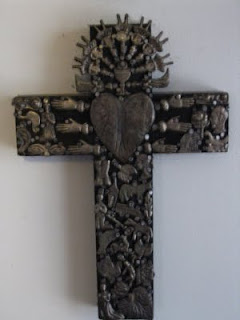 A cross for each member of the family.  Each person has had trials, successes, failures and triumphs, wishes and desires.  I love this idea so much.  I guess I'll need a few more charms, though.  But, I have enough to start  mine.  Now, I'm off in search of the perfect cross.