What Are You So Afraid Of?

I love being spooked.  I really do.  I love this time of year.  I love that spooky movies are re-running.  I miss my mom more now, than any other time, including Christmas.  We both loved some spooky movies.  I remember back in the day when ABC channel 7 had its Four-O-Clock Movie.  In October, they showed scary, spooky movies.  Some were the old black and white standards like Dracula, or Frankenstein. Psycho. Others were newer;  Rosemary's Baby.  Let's Scare Jessica to Death.  Those last two were our absolute favorites.  I do remember watching The Incredible Melting Man with her and the two of us laughing ourselves sick.  Talk about a cheesy B movie!  We loved Frogs!, too.  I secretly think she enjoyed seeing Sam Elliott as much as I did!

It took seeing The Amityville Horror to truly scare the crap out of me.  And I saw it with Mom at home on the old VHS.  I can remember walking around the house holding my rosaries after everyone had gone to bed.  Not really sure why that scared me so much.  I nearly peed myself when the scene with the glowing, red pig eyes appeared at Margot Kidder's window.  Something about that just freaked me out.

I remember talking about what scared us with my cousin when we were younger.  We'll call her, "S."  She would come over to spend the weekend with me almost every other weekend.  If she wasn't at my apartment, I was at her house on those other weekends.

My parents received a book from a family friend for Christmas in 1980 called Strange Stories, Amazing Facts.  It's a Reader's Digest plethora of odd tales, unusual happenings and downright scary occurrences.  I found this book to be fascinating.  Except for one part.  I showed the book to S.  She too thought it was a cool book, but found a part that she simply could not discuss;  Jack the Ripper.  That, she said, scared her so much it made her sick.  She did read the story in this book about him, but seemed to already know more that what this book shared.  She refused to discuss it any further.  I respected that.  Still, at times, the subject would come up and she would reiterate the story, only to stop again, because it frightened her so.

Let's go back a bit.  I remember taking this book from under the Christmas tree on Christmas night and curling up into my new sleeping bag, munching on Christmas candy and reading this book for the very first time.  I skimmed it, actually.  So many interesting things!  It was when I was about halfway though when I turned the page and saw an image that would haunt me for the rest of my life.  Before I even read the story, the  photos chilled me to the bone.  They bore straight through me, to my very core.  Why?  I can't explain why.  They just did.  It was when I read the accompanying story that I truly had to put the book away.    Check it out:
Ugh.  I find it hard to keep writing having to look at these!  The story goes that in 1971, woman living in Belmez, Spain suddenly saw what appeared to be faces in the tiles of her kitchen appear.  She tried to scrub the images away, but they only became clearer and brighter.  While skeptics claim that the tiles were made of whitewash, and that fakery had most likely played a part, the phenomenon  was considered by some parapsychologists as being one of the most important paranormal phenomena in the 20th century. 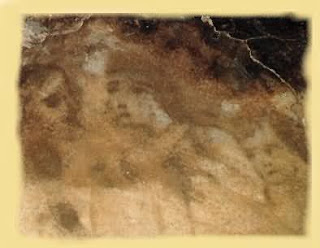 Yeah.  Whatever.  True, false, fake, or real. It creeps me out so badly that I have a hard time even researching it.  In all honesty, I don't even care if it is real or fake.  If it's just someone's idea of a weird, spooky story, fine.  You win!  If a person wants to go so far as to scaring people by making up a creepy story and faking photos, for this chica, they've succeeded.   Is it real?  Possibly.  Probably not.  Doesn't matter.  It still scares me.  See, I'm so bothered by this I'm talking in circles.  Nothing spooks me as much as this.

Heights.  I had a hard time even watching my kids at the tot-lot when they were little.

Roaches.  They carry disease.  They are filthy.  They are ugly.  I have an innate fear of them crawling into my ears while I sleep.  Not that I have bugs in my home, I don't (knocks on wood).  I did when I lived in Laurel.  Let's not talk about that, now. 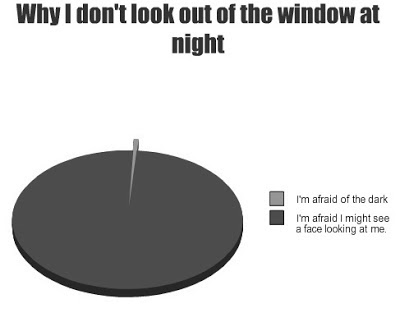 The dark.  To a point.  I can walk around my house in the dark.  I just don't like to.  Like if it's 3AM, and I wake up to use the bathroom and on my way back to bed, there's no way in Hell that I'm peeking through the blinds to see what's what.  I'm not trying see a face staring back at me.

Being shot.   Sure, I could be stabbed, choked, beaten with a bat.  I fear being shot.  Even a graze scares me.

That's about it, really. 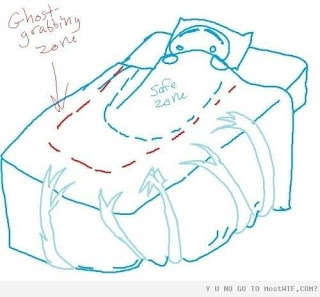 So, if you were to ask me what truly scares me, what I am really spooked by, what I see sometimes when I close my eyes at night, what story would make me want to cuddle with a mountain lion after hearing it being told while sitting around a bonfire,  this is it;  The Faces of Belmez.  I'm not talking about the normal things we all fear; loss of a job, health issues, fear of speaking in public.  I'm talking stuff that makes your skin crawl or makes you pull those covers a bit tighter.

Everyone is scared of something.  What makes your hair stand on end?