So That's What They Are!

When I was a little girl, I was very easy to entertain.  Give me a box of crayons and some paper, and my folks could leave the apartment all day and come home to see my still coloring and drawing.  Not that they did this, but they could have.  I enjoyed doing very simple things.  I could sit on my steps and look at the stones embedded into the concrete and not get bored.  I actually did this at the playground just around the corner.  It was black but stones were mixed in with it.  I would ride my bike into there, and sit there looking at the colorful stones.  A few times I even tried to pry them out, but decided to just leave them.  I could always come back to look at them there.

My dad had a lovely garden back then.  Okay, he's always had lovely gardens.  This one was the best.  Coleus, a mix of Zinnias, Roses, a trellis he built himself with my mom's favorite Morning Glories creeping throughout.

The way our 'patio' was situated was a bit odd.  The same for most of the residents that had a ground floor.  You walked out onto a small 3'x3' concrete platform - on either side was where the trellis was.  Then, you walked straight out for about ten feet, and came to three steps.  This was where I spent many hours;  Sittin' on the steps.  Mom would yell from the kitchen:  "Mare!  Where you at?"  I'd turn and yell, "Sittin on the steps, Ma!"  I think we said this daily from 1969 until I moved out in 1987.

All of the apartments were on hills.  Bottom floors had a little hill.  All had these same three steps.  So, my dad put a rock garden on either side of these steps.  Layers of flowers, divided by large river rocks and later he used that God-Awful red scalloped stone.  I always hated that stuff.  Anyway, he would put the shorter Zinnias in one year, and another flower another.

One year, he put in these really colorful flowers that resembled little roses.  Pink, purple, red, magenta, yellow and white.  They had these needle-like leaves.  I sat on the steps, coloring.  My gaze would often wander over to these flowers.  The squeaking of the screen door, then SLAM.  "Hey Squirt.  Whatcha doing?"  Dad would sit next to me.

"Nothing.  Just looking at the flowers."  He then showed me something that I thought was just the neatest thing.

"Look.  See this brown thing?  It's a seed-pod."  I scootched over onto the lower step to get a closer look.  I watched him pinch it off.  He held his hand out.  I watched as he used his finger to roll it around.  "Here.  Hold it."  I did.  He picked another pod out of the flower bed.  "Now, watch this."  I watched.  My father was a very cool guy and anytime he said "Watch this," I knew something really cool was about to happen,  He held the pod in between his thumb and index finger.  Then he simply pulled the top off.  My eyes bugled.  "Look inside.  See those tiny black things?  Those are seeds!"  This was amazing to me.  Being little and not knowing that seeds came from flowers, I was amazed.  He sprinkled them onto my hand.  Tiny, black seeds.  Then he told me to watch again.  He put the seeds into my hand and then picked up another pod.  This one, was green.

"Watch this.  Now, don't ever pick up a green pod.  I'm just doing this to show you something important."  He opened it and inside this pod were white seeds.  "These are seeds, too, but they are not ready.  Tell me how you might think you can tell if seeds are not ready to pick."  I thought about it and said,

"Well (my father had a way of saying 'well.'  I knew I was in for an explanation if he drew the word out longer than three seconds),  that's almost right.  The shell of the pod is brown and brown pods mean ripe seeds.  Green means that it is either a new flower about to bloom, or it is a pod that is not ready to pick."  I immediately started sifting through the flowerbed, in search of a ripe pod.

"I found one!"  He showed me how to properly pluck it off without damaging the leaves.  He told me to try.

"Don't yank.  Just pinch the top off and pull it off very gently." I did this.  I was so tickled.

"Tell you what..."  I loved when my father said 'Tell you what.'  It meant I was about to get something good.  "I'll make a deal with you.  I will get you a jar, and we can make a label for it.  It will be your jar.  It will be your job to collect these seeds for me.  Every day, come out here and look for the brown seed pods.  If you see more than two, go get your jar and just put them - whole - into it.  If you don't see more than two, leave them alone to ripen.  Think you can handle that?"  Oh, boy, could I!  "Then, next Summer, I'll let you have your own little garden to plant them.  Deal?"

I did this for a few years.  There was one little problem with this, though.  He never told me the name of these flowers!  I guess I never thought to ask and he never thought to tell me.  Years would go by and I would see these flowers and get real excited, only to not be able to find out what they were.  I did ask my dad about ten years ago.  He told me what they were, but I forgot.  I lost the piece of paper that I wrote it down on.  Oh well.

Today, my husband and I decided to go to Walmart (we both detest our Walmart and go only because it's inexpensive) to get some peat moss for his Venus Fly Trap and some soil for my vegetables.  Passing the garden section outside the store, we came upon flats of flowers.  Guess what I saw!? 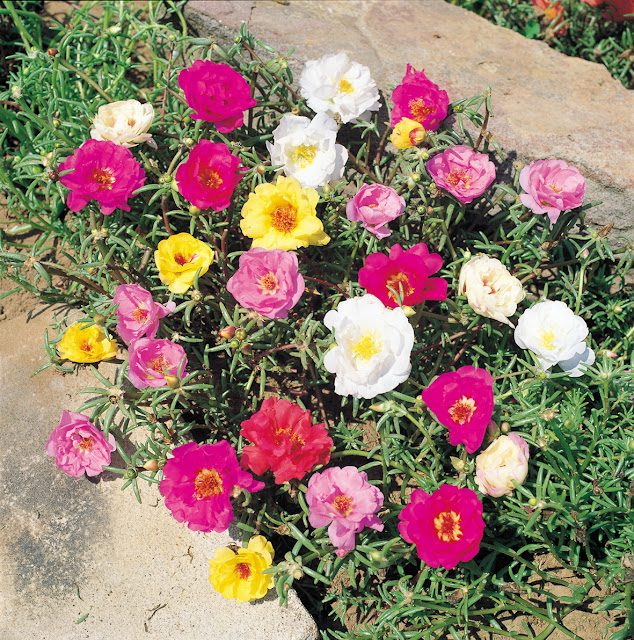 I stopped in my tracks saying, "Oh, my God... there they are!"  My husband seemed puzzled.  "These are those flowers!"  I look and look.
"What flowers?"  I went on to explain.  I looked for a label.  Nothing.  Then in the back of a flat in the back I found an info stick.  I snatched it and stuffed it into my back pocket.
I came home and went straight to Google.  Sure enough, I had found my long-lost beloved flowers!

I believe it is a bit late in the season to plant them but now I know what they are!  They seem to love dry, arid areas.  A perfect spot is right under my bedroom window.

I feel as if I have been hugged by my father.  He loved these little flowers.  I loved how he showed me how to gather the seeds.  It was our little project, and now I can finally continue it.  I am still very easy to entertain.  Thanks, dad.

Thank you to gardenguides.com for the photos!