This will be short and not so sweet.

I am really quite amazed at all of the Fifty Shades of Grey hoopla.  It's as if the world suddenly discovered erotica and that it is actually read.  Really!?   Why all the newness?  That's not to say I read nothing but erotica, but let's face it; it has been around.  Forever.

The thing that makes me scratch my head and think really? is that this series of books, in my opinion, and the opinions of many I have spoken to, is just horribly written.  I am not an English major, but I do know basic grammar skills.  This series is loaded with errors.  The story?  What story!?  And finally, the sex.  Mediocre at best.  I would giggle, not at its naughtiness, but because in my mind's eye I  imagined a love-struck teenager writing this story (and before you go off half-cocked [*snort*] on me, I fantasized in my teenage years.  Sexy stuff.  You did too, and you know it) while thinking about her teenage idols. Her descriptions of bodily functions were repetitious and juvenile.  Oh, my.

I roar with laughter at the new statement that in another seven months, there will be a 'Fifty Shades Baby Boom' - thousands of Grey babies.  That blows  my mind.

Again, maybe it is just me, but there is so much better erotica out there;  many different kinds of erotica, and it's been out there forever.  I just find it so amusing that it took this book to bring reading erotica out from under the covers.  Maybe if it had been based on Harry Potter fan fic instead of Twilight?  Shiver.  Maybe it's the whole Twilight thing that turned me off from the very beginning.  No, it's the bad writing.  The bad sex. 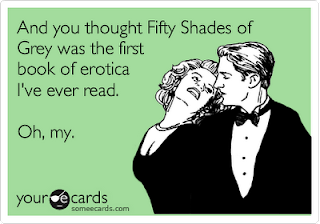 I'll be skipping the movie, as well.