"There is nothing to worry about.  She's fine.  A person could live quite well on nothing but peanut butter.  Just make sure she stays hydrated."

Not exactly what my parents wanted to hear.  In elementary school, I liked noodles, peanut butter, chicken, beans, and beef.  Hated cheese.  Hated milk (still do).  Hated fruit (still do... although I now like a few).    I tried cheese only because I was told by a friend's mother that I would not be able to go to the pool with them unless I tasted a bit of a grilled cheese sandwich.  Okay, that worked;  I am now a seasoned cheese connoisseur.

As I got older, I bravely tasted new foods.  I was never adventurous as far as trying new foods went;  that is my eldest son.  Not me.  Ever.

When I was entering high school, I noted something odd.  A lot of kids ate pickles.  Not chips.  Not spears... but huge, monstrosity monster - sized pickles!  I was fascinated.  I wondered why kids chose to eat these huge veggies instead of a bag of Fritos at lunch.  As I became more comfortable in high school (The OLD Montgomery Blair), I made new friends and they, seeing me with my little bag lunch, showed me where to get a cool lunch:  Ertter's Market. 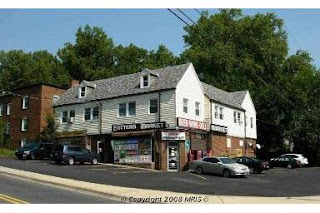 Ertter's was just off campus to my high school.  It was where the cool kids hung out;  the smokers.  I fit into this crowd... to a point. I smoked... cool?  Maybe.  Anyway, Ertter's (which, along with Montgomery Blair, was basically in my aunt and uncle's back yard... that's another blog story) sold everything a high school kid could ever dream about eating for lunch; all kinds of pop, candy, chips, sandwiches, cigarettes (if you were 18... they never carded any of us), and... a huge barrel of pickles right at the entrance to the store.

Years later, pickles forgotten, I was visiting my father's home in Virginia.  I had my own children, now (even had a very picky eater of my own to contend with).  My father loved pickles.  Especially Bread & Butter Chips.  He went to make a sandwich and discovered that he was out of pickles.  He wasn't having that.  He loaded us all into his tiny Chevette (The 'Vette) and off to Giant (his other home) we went.

When we were back home and the other items were put away, he made a huge "Dagwood."  That's what I called his sandwiches;  they had everything but ice cream in them.  Then he opened his jar of pickles.  The smell took me back to hanging out at Ertter's.  Dad knew me so well.  Holding a single chip out he said exasperatedly,

'Just eat it, dammit!"  I had no choice.  I refused to let my kids see that I could not try something new.  I licked it.  Dad shook his head.  Again,

It tasted better than I had ever dreamed it could.  I think I ate half the bottle, and I've loved them ever since (Even though I still don't like cucumbers).

With the joys of the internet and me being a list-making fool, I joined Pinterest.  I'll make a list of anything and this was a dream come true for me.  I love it.  I think it's a great place to learn so many neat things, including recipes.

I had never even heard of "Refrigerator Pickles" until I saw them on Pinterest.  Curious, I looked at them.  I knew I could make them.  My mother did a lot of canning back when I was a child.  Remembering her sterilizing the rings, lids and jars; I wasn't wanting to do that.  These seemed perfect!

I made them following the recipe to the letter.  Okay I left out the celery seed.  I was out and frankly did not want to shell out almost $7.00 for a tiny jar, so I left it out.  I was skeptical.  It could not be this easy;  I mean it took me all of about nine minutes from start to closing the lid.

They were good.   Not only good, they were damn good.  Fantastic.  I was amazed, and well, pretty damned proud of myself.  My dad would be so proud of me!  My kid's friends love them.  I LOVE THEM.   I will never buy B&Bs from the store, ever again.
I also happen to love a good, sour, dilly pickle (Thanks, Ma).  I love garlic.  Now, I have tried every brand the store sells and while I absolutely love Mt. Olive's Bread & Butter Chips, I don't like their dills.  I don't like Claussen. Vlassic garlic dills I can eat, but I don't think they have a lot of flavor.

Again, back at Pinterest, I looked for recipes.  Refrigerator Garlic Dill Pickles.  I had to search but eventually found a few recipes.  I decided to just Google for them.  Site after site posted recipes but stated that through trial and lots of errors, had given up on making them.  Then I found it.  This would be the recipe I'd try.  So, again, with trepidation, I made them.  I really was not expecting them to turn out.  At all.  I decided to make a very small jar so I would not be wasting too much money when I eventually threw them out.  Now, I wish I had made a bigger jar.  Oh.  My.  God.  **insert a chorus of angels**  They. Are. Delicious!  Just the right amount of punch.  I love a sour pickle;  lip-puckering-make-your-eyes-blink good with just enough sweet to make it balance.  My mom did too.  She would have loved these, I'm sure of it!  Again, I pat myself on the back.  I'm damn proud of myself!  I think I may have found my calling!?

Here are the recipes.  These are MY adaptations. 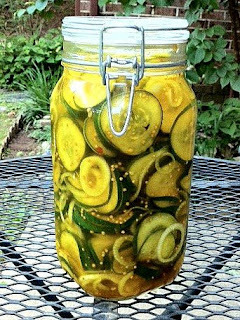 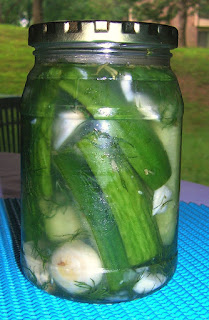 Ed.  These are really sour.  I mean, I love them, but my husband thinks they could be toned down a bit.  The next batch I'll do that, either adding a bit more water or a bit less vinegar.  Maybe 1/3 of a cup?  Seems a bit chintzy to me.  I have all summer to experiment!