Welcome to another day in the life of Maryfrances.  So, I'm checking into Facebook yesterday, and I see that my cousin Fran posted a lovely photo of a sea shell for me.  We had been discussing the beach, and I mentioned how much I love it, and how connected I feel to the sea; and my love of shelling.

I not only loved the shell (She is sending it to me!  A shell from Cali... YAY), but I mentioned how much I loved the stones beneath it, as well and mentioned that I collect stones.  Then my cousin Karen chimed in (Yes, all three of us are first cousins), and told me that she too collects stones. She told me that rocks that have natural holes in them are very powerful, and that my mom collected them, too.  I still have a rock that she painted. I'd photograph it, but it's too high up for me to reach right now... doc's orders: NO lifting or reaching.  Another time.  Anyway this opened the door to a rock discussion.

When I was a kid, my father would come home from work, or the grocery store, or from just being outside staking the tomatoes, and would approach me and Ma.  Digging into his shirt pockets, he'd say,

"Look what I found"  He'd hand me a rock. Or a stone, or a pebble.  I know, thinking back, that my mom was interested, but not nearly as much as I was.  When my father found rocks, knowing that he was -to me- knower of all things beautiful, I was always amazed at what he would pick up out of the dirt.  If my dad found it interesting, by golly, it was.  My dad didn't pick up just any rocks.  But you know what?  That's exactly what he was doing.

When I was around 8, Santa Claus brought me a rock tumbler.  Plastic and cheap, but it was fun.  Included was the 'drum', a huge rubber band that went over the lid, so the contents would not spill out through it.  4 bags of 'grit' which were numbered 1-4 on the packages.  1 was the coarsest grit, and 4 was used last, as it was a 'polishing' grit.  I was so excited, but I think he was even more. My dad had a very good system; he gave me things that he was interested in doing, and got me into it.  Nice, Dad!   Again, my father did things with me that required patience.   Rock tumbling was not something one did and a week later was bejeweled with gorgeous, smooth stones.  Alas.  Still, it was a big day when I would come home from school and dad would say;

"C'mon, Squirt; let's go check on those rocks."  We did it in the kitchen, as it was a very messy task. Getting that thick rubber band off was a job in itself!  Finally, he'd unscrew the lid and he'd then get a bowl of water ready.  He always took the first stone out.  My eyes grew.  Then, he'd swirl it into the water.  While it was smoother, it was still very opaque and dirty-looking.

"Put it back... needs more time."  And we'd put it back together and place it back onto the tumbling mechanism.  By the way, I owe my Ma a lot of thanks;  the tumbler was required to stay on 24/7... and it made a ton of noise.  We actually got used to it, though. It became a sort of 'white noise' if you will.   We'd check the stones every two weeks or so.  Dad changed the grit.  Finally, 8 months later, I had gorgeous, shiny, stones that were nothing like the ones we put in 8 months earlier.  I was amazed.  So was dad.  A few years later, he bought himself a very nice rock tumbler: A Lortone.  As I got much older, he improved them. He bought another and with the help of my Uncle Larry, they built a dual machine, engine and all.  I still have it.  It needs repairing.  I may give Unc' Larry a shout soon and see if he wants a project to work on. I did manage to get some of the last stones he tumbled.


I have no idea what these three stones are, or where Dad got them.  One looks to be Lapis Lazuli.  One looks to be Turquoise.  I have no idea what that pink one would be.  That one is my favorite.   Just look at this thing:
So, that is what started my love of rocks and stones.  I am always on the lookout for the perfect stone.  I'll never find the perfect stone, I know.  Still my idea of such a thing is flat, oval or round and smooth.  So, here is my little collection.  It is little because I truly feel that they belong where I find them; on God's earth.  Still, I'm sure he doesn't mind if I hold a few of his best ones for a while.

Some of my favorite stones I have not found outside.  Some, that I call 'Healing Stones,' come from a place of healing;  The hospital.  I won't say which one, but most of my readers already know where.  I have been hospitalized a lot within the past three years.  Most were for surgeries I've had.  Some were for illnesses and long term stays.  When you're in the hospital for a long period of time, you become accustomed to what I refer to as "Hospital Time."  Sleeping during the day, awake with pain at night.  I was always encouraged to walk at night.  So I did.  There is a water wall on each floor.  It is a soothing, wall of cascading water; just like the one on the TV show, "House, M.D." At 3:30a.m, I would unplug my IV cord from the wall, grab my robe and slowly start my morning walk. I would walk by the nurse's station and whisper greetings.  Then I would head for the atrium where the water wall was. I'd gaze at the water wall, listening to its soothing sounds.   At the base was a bed of thousands of river stones.  Round, oval, and flat.  Making sure I was alone, I would circle the water wall, looking.  Finally, I would find it;  the perfect stone.  I had to have it.  My bathrobe had huge pockets.  Again, making sure nobody was looking, I quickly snatched it, and put it in my pocket.  I did this ever time I was admitted:


I keep these separate from the others.  I really don't look at it as stealing them.  I paid for them. I deserve them.  I look at them a lot.  I reflect when I look at them.  I am grateful for the the place I took them from.  Seven little stones.  I do believe they have a certain power to them.  They are small, yet very strong.  Put together, they tell a story. 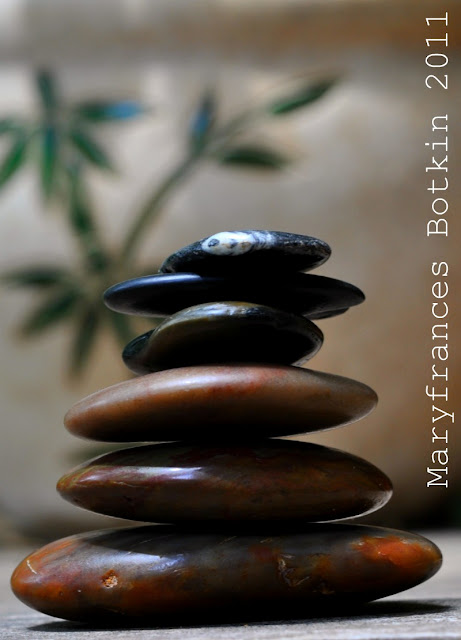 So, there they are.  My Stones.  I'm sure I'll add to my little collection, but I think my Healing Collection is complete.  I'm praying that I don't get another opportunity to take more.

Until next time;
Keep Rockin'!