In writing yesterday's article, I was reminded of yet another subject I said I'd blog about and again, forgot about!  Is that how this blogging thing works?  I blog about something, and it reminds me of another interesting tidbit I feel is blog-worthy?  If so, I'm loving this -- and quite curious of what this will bring to mind!

Anyway, back to what I was reminded of.  A few entries ago (I can't remember which entry it was), I was discussing money or my 'pushkie.'  At least I thought I had blogged about it;  I can't seem to find it.  Anyway, somewhere in that entry I mentioned my mother's piggy bank.  I said I'd blog about it sometime.  Welcome to Sometime.  My cousin Karen inquired about it, describing it nearly to the last polka dot.   Well Cuzzie, here it is: 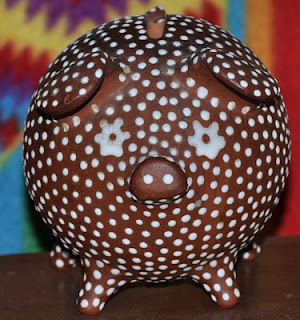 Cuz, I don't know when she received this, or by whom.  Maybe you know?  All I know is that it's been a part of my life as far back as I can remember.  It sat on top of the make-up box that Dad made for her (I have that, now), which sat atop hers and dad's dresser.  Same spot for 21 years.  It was HER money.  Now, I'm not going to start an argument over money,  but Ma was a homemaker.  I don't know the financial arrangement my parents had.  Did Ma get an allowance (horrible images of Lucy & Ricky now enter my head).  I never remember hearing her ask for money --  maybe she did, but didn't want me to know about it?  I don't know.  What I do know is that nobody -- and I mean nobody --  ever touched her piggy bank.  She took wicked good care of it.

I recall a day that we were getting ready to head over to my Aunt Cammie's house for a family cook-out.  I was around 14 or so.  We were running late. While I didn't hear anything out of the ordinary, I did hear Dad.  "God-Dammit." Now, normally, I'd think nothing of it; dad always said that... but not in the way I had just heard him;  scared.  I heard my Ma yell from the kitchen;  "What, Frank?"  Then, an overly-cheerful, "Nothing, nothing."  I was in my room putting on thick electric blue eye liner when I hear a soft knocking and then a frantic whispering;  "Mary.  Mary!"  I run to open the door.  My father never called me by my name.  Something was wrong.  I ran to let him in.  He came in holding a green bath towel.  He nodded toward my bed.  When he opened the towel, my eyes grew in shock.  There lay Ma's pig... with its ear broken off.  Before I could say a word, he said;

"Oh, I couldn't get the damned drawer open.  I needed a hankie and the damn drawer wouldn't... look;  hide this for now.  I'll glue it when we come home from Cam's."  So I did as I was told, knowing how nervous he was about Ma finding out.  No, he wouldn't keep it from her; he'd tell her, just not now.

He did tell her.  I know it broke his heart to do so, but as much as it broke his heart, it broke Ma's more.  Sure, she tried to hide it.  She had a way of fibbing nicely... smiling through tears.  It only made Dad feel worse, but then again, it was hers.  I felt for both of them.  I knew Ma was devastated, but she didn't want Dad to feel as badly as she did.  And yet, all of this woe was due to a silly piggy bank?  You betcha.  Of course Dad repaired it perfectly and Ma was happy again.  From that day on , while it still kept its place atop the make-up box, would now be covered in a folded washcloth on top.  A few times, I had to explain to girlfriends why there was a washrag on top of it.  Shrugging and not really wanting to retell such an epic tale, I'd say,  "I dunno.  Maybe to keep me out of it?"

When I was little, really little, I took a nap every afternoon with Ma.  She'd read her Alfred Hitchcock thrillers and I'd flip through the National Geographic collection.  Growing tired, I'd put them away and snuggle in.  Ma's giant antique fan whirring, I'd find the piggy bank and study the dots on it; making patterns.  Soon my eyelids would get heavy, and I'd focus on the eyes of the pig.  The only design difference.  I loved how the artist made them;  from six dots.  How did artist get the pupils so perfect?  Trying to figure that out would almost always send me to sleep. 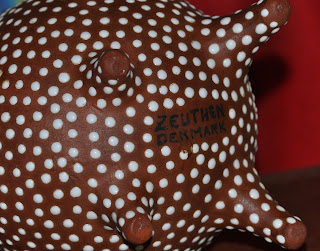 I now have Ma's piggy bank.  I don't keep a washrag on top of it.  In my last blog posting, I noted that if (god forbid -- again) there was ever a fire, there are only a few things in my home that I would rush to save.  This is another.  Again, I don't know where Ma got this or who may have given it to her.  I do know that she was always proud to tell me that it was from Denmark.  Did she know someone from there?  Did someone visit there and bring this back for her?  I have no idea.  Karen, if you're reading this, might you know?  I'd love to hear the story of this Little Pig and how it came to be such an important object to my mother.  She treasured it, respected it, and demanded respect for it.  If it was made of solid gold, it wouldn't have been treated any different.  I never quite understood why.  Honestly, it doesn't really matter, now.  I now have it, and treat it as if it was made of solid gold.  Nobody touches it.  Only I can.

So there you have it.  Another thing I treasure.  A silly thing.  It's my silly thing, though.