October 1, 2010.  An exciting day in the Botkin home.  We were expecting.  A brand-new little baby. We wondered if it was a boy or a girl.   We wondered how little it would be; it's been a long time since we had one so little in the house!  It was still quite warm outside, so we knew bringing it home without heavy blankets would be okay.  We loaded up the truck, and Alex brought along his best friend.  Yes, we were all eager to meet our newest family member.


We got to Petsmart, and ...  Oh wait.  You thought...  Please, darlings.   I'm referring to our new parakeet!  Anyhow...  We got to Petsmart and as we approached the large glass enclosure, the parakeets inside stopped for a brief moment to look at their newest admirers.  I'm sure, in their own parakeety way, they were checking us out, too.


I saw it.  THE ONE.  It was tiny; with the tell-tale black 'baby' feathers atop its tiny head.  It was yellow with a bit of blue and green under its belly and along its tail feather.  Beautiful.  I pointed this birdie out to the guys.  Nodding they agreed that this one was a possibility.  I already knew, so I left them and went on to shop for its new toys, food, and other necessities we'd need.  I watched the guys watching the bird.  Alex and his buddy became bored.  Perhaps they too knew that I was right.  Rob was intently looking.  Some were very funny!  We had discussed earlier that we would choose the very silliest bird we saw.  I know to never choose the loneliest looking bird, no matter how much it tugs at your heartstrings.  It's left alone for a reason, unfortunately.  Finally we decided;  That sweet little tiny one... yeah that one, the one in the corner, chirping.  The attendant that approached the cage to 'get' it, was donned in a surgical mask, gloves, a box and a long stick.  It was actually very unnerving watching her try to slam the open box over her, scaring not only her, but her entire flock, as well.  Finally, she (Yes, it's a GIRL!) was caught and brought out.

We brought her inside an and we all stood around as I put the now open box near her cage.  She finally stumbled in.  We knelt and watched.  She did nothing.  Now, I know she was scared and knowing this, we left her alone.  We spoke to her when we'd pass the cage.  I found a great blanket to cover her with, (Thanks Bernadette!) and we said 'goodnight.'

The next day, we opened her door.  I put my hand inside.  She just stood there.  Not a bit of ire.  No biting... at all!  She let us do anything to her.  I figured it was fear;  She is too scared to put up a fight.  I got Rob's camera and took a few photos.  Later that day, Aaron started playing with her.  Again, no biting.  She let him take her out of her cage.  She instantly became interested in the world outside the sliding glass door.  "Friends!"  She became very animated.  She even met a squirrel friend. 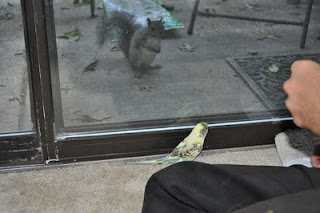 Aaron soon found one of his old Tech Deck skateboards.  What the heck.  If she gets scared, she'll fly away, right?  No fear.  That bird played with Aaron and that skateboard for over an hour.  Remember;  this is only her second day with us! 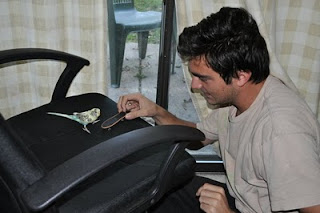 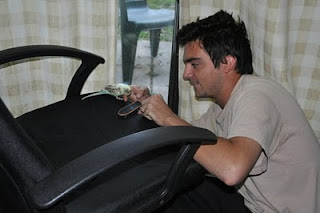 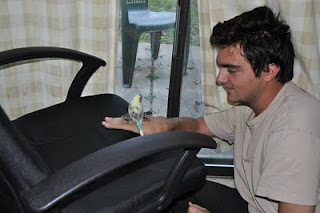 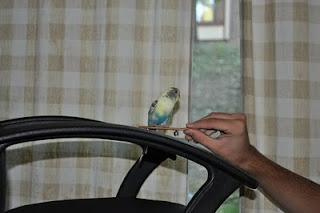 Still, even though she did this, she did nothing else.  As the days went by, she would sit quietly in her cage and do absolutely nothing.  Fine.  She is scared, lonely; missing her flock, and she is in a strange place with strange smells and even stranger people constantly peering into her cage.  By the time a month went by, she learned that she could sit on the perch located outside her cage door, which again, we always kept open.  Even so, she would allow us to touch her, and from day one, she sat on our fingers.  Now, whether she like it or not, was another matter.  One day, I decided to take her into my bedroom.  I remembered how much Fresca loved sitting in the window, chirping with his 'friends' outside.  Good idea!  She loved it!  She started chirping with them.  Soon, she would fly (or try to;  her wings were still clipped short) onto my bed and just miss it, landing on the floor.  I held out my finger.  "Up, Daisy!"  It took a few tries, but she soon flew onto my finger and would let me bring her to my bed.  I was ill and spent a lot of my time propped up on my made bed.  She learned the layout and would explore happily.

Still, we worried that she would just not be a fun bird.  She did basically nothing. Other than an occasional bit of birdie chatter, and sitting on my finger, she did nothing.  We started resolving to the fact that even though she was a beauty, we had purchased a dud.

A week before I was due to have my hysterectomy, I spent a lot of time cleaning and preparing for a long recovery once I got home.  I was washing dishes when I thought I heard her chattering.  I turned off the water.  Of course, she stopped.  I resumed my washing.  Sure enough, I heard her.  Later in the week, I decided to move her cage.  I took away a few toys.  Her cage was closer to my recliner.  It was as if I had switched on the light;  She began to play!  A first it was just with one little toy on her perch.  Then she found her cuttle bone (I was very worried about that;  Fresca hated his and never used it... and I'm convinced it contributed to his bad health).  Just before I left for the hospital, it happened:  She left her cage, sat on her perch, flew to the arm of my chair and with a bit of coaching, she flew onto my laptop.  I nearly wet my pants I was so overjoyed.  She did it the next day, too.  I was so afraid she would forget about it and me since I would be in the hospital for a while and not able to sit in my recliner.

My recovery from surgery has been long and very painful.  Daisy Mae  (after three days of name dropping, we decided on Daisy Mae... even though we all still call her "Birdie... or Baby Dirl... yes that's "girl" with a "D."  Blame my mom for that one) has been a big part of my recovery.  She sits with me every morning.  We have our routine:  I get my coffee and turn on the laptop.  She hears the start up beep and before her cover is removed, she's on my keyboard.  I always do the Baltimore Sun Crossword Puzzle before I do anything.  We do this together: 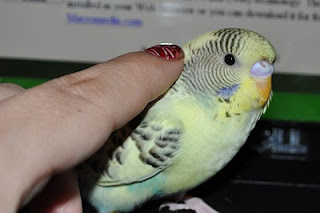 She pecks at my nails, and allows me to pet her.  Just yesterday, I offered my nail for her to nibble on and she did.  I took it away.  I offered it again, but at a distance.  She approached it and lay her head against my nail.  I scratched her head.  First time.  She LOVED it. 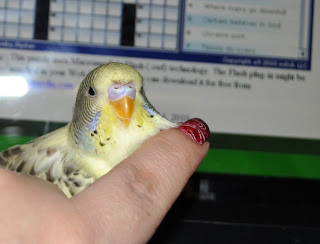 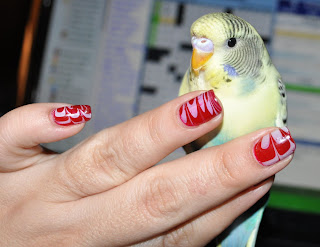 I offered my nail to her and she nibbled at it, again.  I took it away and she followed it.  I did nothing.  She then lay her head on the side of my nail.  She was so cute!  "Scratch my head, mommy?"  So very gently, I did.  She was in Heaven!  Her little head relaxed and her little eyes closed.  I stopped and she let me know that she wanted more by giving me an angry peep!  I resumed.  Again, in Heaven.  I could even use both of my hands to very gently scratch her head!  I could, for the very first time ever, feel a parakeet's neck bones!  No other bird, as much as they loved me, would ever let me scratch their heads let alone their necks!  I stopped and soon she was sleepy, but not quite ready for a nap.  First she wanted to play with my fingers more. 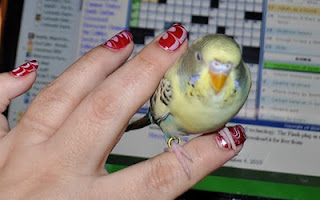 Soon, I have a very sleepy girl on my hands, literally.  She stays on my hand and starts to fall asleep. She fluffs up, and yawns (Okay birdie mommies; are birdie yawns the sweetest things ever!?) and her eyes close.  I let her stay there for a while.  It is hard to type one handed! Have I mentioned that she has never, ever, bitten any of us?  Only loving little nibbles.  Anyway,  I put her down onto the warm keyboard and she takes a little nap while I complete my crossword. 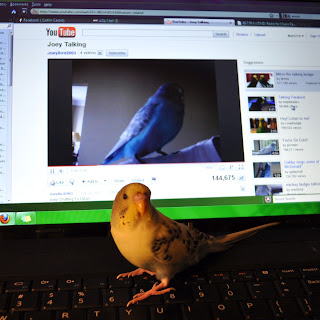 Now it's time for her to watch her favorite shows!  YouTube!  Parakeets doing everything from imitating ping-pong balls to talking about how silly their owners are. Daisy loves Johnny.  He can imitate a ping-pong ball with amazing perfection (Daisy suggests this video: Johnny the Talking Budgie imitates a ping pong ball!)  I guess if I have my favorite shows, Daisy can, too!  We are all just so thrilled that she has finally allowed herself to relax and get to know us.  She truly is a little minx and I couldn't be happier.  I do miss Fressie, but I know he is always with me.  He taught me a lot about "Live with Aves" and I think it's helped all of us in getting to know Daisy, aka "Baby Dirl."  I let Santa know that she would LOVE a new playground for Christmas.  If she is a good Baby Dirl, I'm sure he can have one made.    Merry Christmas, Daisy Mae!
To Be Continued!
at December 05, 2010