The Lost Art of 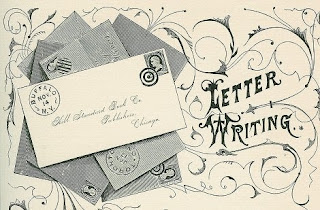 Isn't technology a wonderful thing? Who would have thought, even so much as fifteen years ago, that someday, we would be able to 'chat' with someone without having to call them? We can now have live conversations with ... anyone, at any time, from any point on the planet. Think about this. It amazes me, even now. I remember a few months ago, when Hawaii was expecting a tsunami, two dear friends of mine and I were chatting as together, we watched CNN, and discussed the approaching wave. Even then, I mentioned to them (and yes, I met my friend from Texas via the internet, when AOL 3.0 was the rage) how amazing it was, that we three could be sitting in our own separate living rooms, thousands of miles from each other and yet here we were, able to have a live discussion; Maryland, Texas and Colorado... at the same time, and that we three were watching history unfold in front of our very eyes... together.

Email. I can remember the very first time I heard that term; My sister in law was telling us that she was sending an email to her boss... she'd call us back when she was finished (I'm guessing it was such a new thing, even she had to take her time and make sure it went 'through').

"Email? What on earth is EMAIL?" She tried to explain it to me, but ... WHOOSH... right over my head. Soon, I learned. We all did. And soon, we became owners of our very own computers. My ex- brother in law gave us one that he didn't use. I was so in awe. A computer. In my home. What? I was so scared of it, at first. I thought that if I went onto the Internet, everyone could see me... well, not 'me' but would be aware of my presence. We became the 'electronic family.' Email! Who can I email!? Well, anyone that had an email address. I learned fast, and became an Internet pro, and now, most of the world is, as well my kids, who are way more savvy than I was!

Now, email is the norm. It's just what we do now, which is fine. If you need a recipe? Email and ask. Thinking of someone? Email them and ask how things are. E cards. Fine. Someone took some extra time to go to an e card site, pick out a card that suits me, and typed up a little message, and hit 'send'. Hey, I got an ecard! It took 4.8 seconds to reach me (please don't misunderstand me; I love getting e cards)!

When was the last time you got a letter in the mail? No, not a bill. Not a statement. Not an envelope filled with useless coupons. Not even a card. A letter. Addressed to you by a person you know, in their lovely (or not so lovely) script? Cursive? Remember when you could tell who sent it by looking at their script?

What? You can't remember? Me neither, Darlings. Sad but true. What is even more depressing is the fact that our children have probably never, ever received a true letter; written to them, at all during their lives. They learn the mechanics of Cursive, but once it's learned, it's not utilized. I mean, really; what do they use it for? I've seen my kids sign their names. That's it. Another lost art; Cursive. Another blog, another time; I promise.

I was thinking about this yesterday. What a sad thing, that letter-writing is no longer done. It truly is a lost art. I was chatting with my cousin this morning (again, gotta love the internet; I can now have morning coffee with my cousin every morning), and she mentioned how she wanted to start writing letters again. I was so excited (we have special bond... we have at least one what I like to call "Spirit Moment" where we both say something, out of the complete blue, at the same time, during every chat. Kind of like the cousin version of Twin Speak. It's very scary sometimes... but again, that's another blog for another day)!

Now, I'm not saying I wrote letters a lot. I didn't. When I did, however, I went all out; Had to have the perfect pen, the right paper, colored pencils, and depending on who would be receiving my letter, some of my signature perfume. I made it an evening project. I wasn't one that could stop what I was doing, and start a letter to someone and then go back and finish it, later. I had to have everything organized. That made it fun for me. I put music on that I thought fit the letter I was about to compose. I admit, most letters I wrote were love letters. Still, I would write an occasional letter to a friend or relative that was far away.

Sure, it's so much easier to sit at your laptop and type out a page or two; add a pretty color to your pretty font (which replaces your own script... or comes closest to it), maybe get crazy and select a neat background. We are all getting way too used to instant gratification. We are all in a hurry to have things NOW. Yes, in some instances,RIGHT NOW is good, and sometimes even best. And I too admit that I am desensitized to waiting.

Think about a person you like. Or love. What do you think that person would do if when they went to the mailbox, and found a letter from you? I'm pretty sure that person would smile, ear to ear! Remember how it felt when you got a letter in the mail? It just made your day, didn't it? Chances are, it was a total surprise, getting a letter. "A letter... for me? Wow! A letter for ME!"

Going to the mailbox is no fun, anymore (well, okay, your thing you won at eBay just came... but you knew that was coming). Remember holding that envelope in your hands; turning it over, and even sniffing it? There is something about a hand-written envelope, thick with wonder, that instantly sweetens your mood. You take it inside. Maybe you tear right into it. Maybe you make tea and take your letter outside to savor among your garden. However you decide to read it, it's not only time well spent, but an even deeper connection with the sender is made. Think about the person who wrote it; They took a bit of time out of their day and put it aside... just for you. Maybe they added petals from their own garden. It was in Cursive, too, I betcha. I'm thinking that they pretty much enjoyed writing it... just as much as you enjoyed reading it.