I Don't Get Blue; I Get Periwinkle

Today is brought to you by the color, Periwinkle blue. 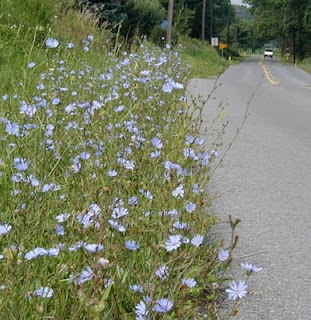 In Summer, when you drive (or ride, as is in my case) along the roads in MD... and VA, you often pass those weeds that grow on the curbs. I think it might be wild Chicory and their color IS a periwinkle blue.

That color has a very special place in my heart. Not all colors do. Just a few.

Once upon a time, my darlings, I was a small child who would wake up to the smell of bacon frying, and instant coffee. Mom was in the kitchen, with her small radio on, listening to Harden & Weaver's growing list of school closings. Dad would be standing in front of the big window in the living room, Venetian blinds pulled all they way up and the draperies open. He'd turn and hold out his hand;

"Look at that." Was all he would have to say before my eyes lit up. It was Periwinkle outside.

It was snowing. Or had snowed. It was before 6:30 AM. The clouds that hung over us, still thick with more snow, were not allowing the sun through. Everything was Periwinkle blue.

Begin the mad dash to get outside before it all melted! I was convinced that skipping breakfast and throwing on my snow-play clothes NOW would keep it from melting. My greatest fear would be that I would not be the first one out there. Not only was I afraid it would melt miraculously in a matter of minutes (even if it was 22° outside), but I always had to be the FIRST kid to go out... at least in my area.

With a slice of bacon in his mouth, dad dragged my old rusty Flexible Flier from out of our closet, cussing as he'd knock some things down. Then he'd look for an old candle that mom wouldn't miss and tell me that by the time I finished eating ("Yes, the snow will still be there!), brushed my teeth, and got dressed, my sled would be waxed and ready to go.

Out into the Periwinkle day. Sledding until I had to pee. Out again until lunch, then back out after a dreaded nap.

The blinds stayed up all day. On days when we got a lot of snow, Dad would stand in front of the window, and talk the Metro buses up our steep hill on Southampton Drive, up that hill, then critique the other 'idiots' that were out driving.

"Look at that. He's never going to make it. And just look at this idiot; trying to go around it..." All day long.

The coffee table was covered in a huge sheet of Masonite. Necessary for the 1,000 piece jigsaw puzzle. A huge pot of Rigatoni on the stove.

I can remember sitting on the sofa, working the puzzle; my eyes would wander to the huge picture window. It's late afternoon, now, and the warm glow of our lights inside make the day so comforting; it's a darker blue, now.  Most of the other windows in the other apartments glowed a deep orange; a nice (and perfect -- according to the color wheel) contrast. When your parents are artists, it's funny what you notice. For me, it was all the shades of blue... and the Periwinkle snow.
at June 01, 2010